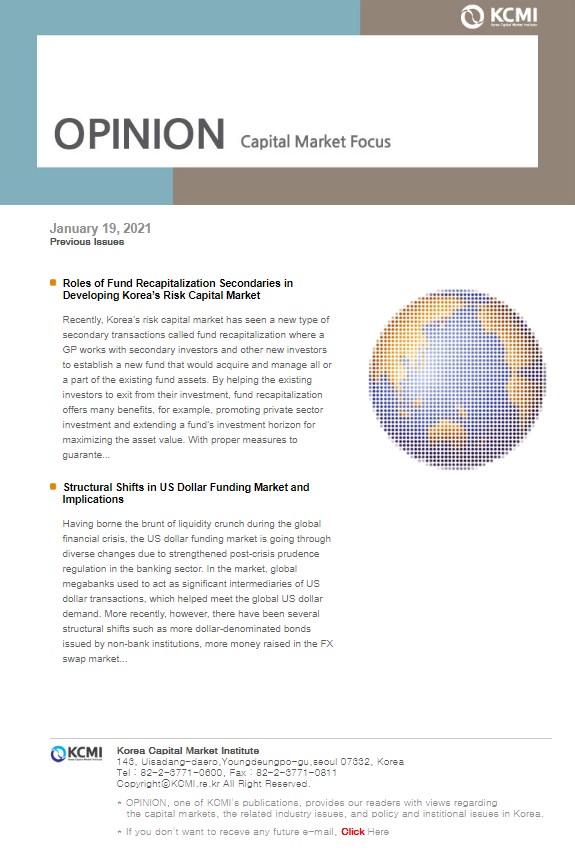 Summary
Recently, Korea’s risk capital market has seen a new type of secondary transactions called fund recapitalization where a GP works with secondary investors and other new investors to establish a new fund that would acquire and manage all or a part of the existing fund assets. By helping the existing investors to exit from their investment, fund recapitalization offers many benefits, for example, promoting private sector investment and extending a fund’s investment horizon for maximizing the asset value. With proper measures to guarantee transparency and fairness that could minimize potential conflicts of interest between the GP and the LP, fund recapitalization is expected to contribute greatly to facilitating private sector investment and the scaling up process both of which seem essential to Korea’s innovative business ecosystem.

In 2019, Korea’s risk capital market saw a novel secondary transaction taking place, which caught market participants’ attention.1) In one venture capital deal, a secondary transaction took place as the fund’s general partner (GP) sold all of the fund’s remaining portfolio assets to a third-party fund established with a new limited partner (LP). The existing venture fund in the deal held a number of potential unicorns such as Sendbird and Zigbang collectively worth several hundreds billion Korean won. In another secondary transaction by a private equity fund (PEF), the GP expecting a value increase in its investment in a shipping operator joined hands with new investors to establish another PEF that then acquired the shipping operator from the existing PEF. This provided exit opportunities to the existing investors.

An exit market that allows various transactions is a must to a virtuous cycle of the sustainable risk capital ecosystem that consists of the process of investment, exit, and reinvestment. This allows investors to maximize profits by choosing a proper exit option depending on the type of investment, market conditions, and investment performance. Common exit options for venture capital and PEFs—the most prevalent types of risk capital—include IPO, M&A, and secondary transactions. Among those, secondary transactions enable investors to exit their investment via transactions among professional investors or funds. Such transactions are again broken into two types—secondary directs where the existing shares in a fund’s portfolio firm change hands, and LP secondaries where fund interests are transferred. While the latter accounts for a large part in other markets, the former type of secondaries represents a significant portion in Korea.

Korea’s exit market for risk capital is more affected by overall capital market conditions. Regulation appears to be no longer an issue thanks to tremendous policy and regulatory improvements made so far. In the area of IPO, policy authorities along with the market have exerted effort to promote the role of KOSDAQ as an exit market. However, the IPO market in nature is susceptible to overall market fluctuations. M&A—another common exit path particularly for venture capital—is largely affected by Korea’s overall corporate ecosystem such as levels of open innovation, supply chain structures, etc. In Korea’s exit market, secondaries are playing a limited role as an alternative to IPO and M&A, despite some secondary direct transactions taking place.

A sustainable risk capital ecosystem requires a structure where private sector investments would be recovered smoothly to create further investment opportunities. Given the nature and reality described above, Korea’s exit market for risk capital needs more diversified transaction structures such as LP secondaries where private investors can exit their investment earlier than scheduled, on top of a more conventional exit path of recovering investments via a fund closure. Because traditional LP secondaries have yet to fully take hold in Korea, the emergence of a more evolved form of LP secondaries as mentioned above seems to be a move in the right direction towards long-term growth and development of Korea’s risk capital market.

A traditional LP secondary transaction is carried out between investors (LP to LP), without any engagement of the GP. In such a transaction, the seller usually participates for the purpose of securing liquidity, portfolio rebalancing, asset reorganization due to regulatory issues or M&A, etc. On the contrary, the buyer’s motivation for this transaction could be to curb blind investment risk and the J-curve effect,2) and to diversify the portfolio.

Although a GP’s role is limited in traditional LP secondaries, GPs became more involved in such transactions in the aftermath of the global financial crisis. LP secondaries had to be carried out by so-called zombie funds that were struggling to recover portfolio assets. GPs have led those transactions between LPs, or have been more actively engaged in them. As those so-called GP-led secondaries began to be viewed as a tailored fix to investment and management issues instead of handling bad assets, more and more GPs are commonly adopting this evolved structure. Backed by such a shift in perception, the aggregate size of GP-led secondaries soared 58.7% annually from $7 billion in 2016 to $28 billion in 2019, with their share in overall secondaries jumping from 19% to 34% during the same period (Lazard, 2020).3)

GPs would seek to engage in a GP-led secondary transaction if they need to secure additional investment, to reshape investment strategies in line with an investee firm’s growth stage, or to extend the investment horizon for maximizing returns. On the flip side, a GP-led secondary enables LPs to recover their investments, to sell any ill-performing fund, or to shift away from asset managers that become less important.

GP-led secondary deals are prone to conflicts of interests with the existing investors. For example, assume that a GP in such a deal offers the existing LPs only two options to either cash out or to transfer their interests to a new fund that has more disadvantageous terms and conditions than the existing fund. If they seek to continue to hold their interest, they have no option but to accept the disadvantageous terms and conditions. In another case, if a GP of a fund thinks the fund’s portfolio assets are hardly likely to generate performance fees, this could give rise to an incentive for the GP to initiate a GP-led secondary to establish a new fund that would not only buy additional time for investment exit, but also lure new investors with whom to come up with a new fee scheme. Due to the likelihood of such conflicts of interest, a GP-led secondary is commonly participated by several advisors in addition to the GP and the LP, which aims to secure fairness and objectivity.

For minimizing such potential conflicts of interest in GP-led secondaries, ILPA5) unveiled guidance on secondary transactions. The guidance recommends that a GP initiate communication with existing LPs immediately, provide sufficient information on potential conflicts of interest, and use independent advisory services. Furthermore, the existing LPs and new investors should be equally treated in terms of the time and effort for the screening process. Also, transaction costs should be clearly disclosed and allocated to transaction participants depending on their benefit from the transaction.

Korea’s recent policy initiative for scaling up innovative firms would be achieved only if a scale-up firm easily receives follow-on investment keeping pace of its growth. However, the path towards scaling up is full of uncertainties with regard to the time and costs it will take for an investee firm to grow to finally generate returns. Furthermore, the growth of diverse LP secondaries such as fund recapitalization in overseas markets was largely driven by a trend where the period for firm growth or profit generation is becoming longer and longer. This is calling for Korea to pay close attention to potential roles of fund recapitalization in the scaling up process.

A fund recapitalization deal could help the GP to better support the growth of a promising portfolio firm via follow-on investment without concerns about the fund’s expiration. It also prevents opportunity losses that would arise from forced sale of assets at or near expiration. Given that it would usually require a much longer period for a firm to grow and generate profits compared to a fund’s timeline, fund recapitalization and its early exit opportunities for private sector investors could serve as critical innovation, contributing greatly to facilitating private sector investment for a sustainable risk capital market.
1) A secondary transaction here refers to one of the investment exit strategies of risk capital where an investment is recovered via transactions among investors—mostly funds—in the risk capital market, instead of via initial public offering or M&A. Such a transaction is divided into two types, secondary directs where the existing shares of the fund’s portfolio firms change hands, and LP secondaries where the fund’s interests are traded.
2) The J-curve effect refers to a phenomenon where a fund reporting a negative return at the beginning sees its return increase as time goes by.
3) Lazard, 2020, Financial Sponsor Secondary Market 2019 Year-End Review. During the same period, the overall secondary transactions grew 30.9% from $37 billion to $83 billion.
4) On top of fund recapitalization, other types of common GP-led secondaries include strip sales, preferred equity, LP interest tender offer, and others.
5) ILPA stands for the Institutional Limited Partners Association.