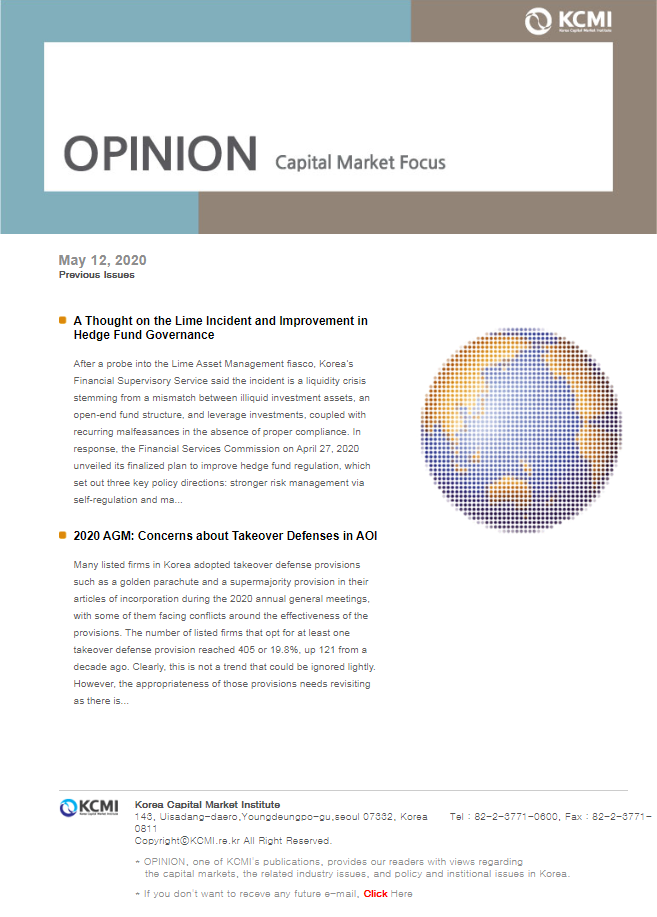 Summary
After a probe into the Lime Asset Management fiasco, Korea’s Financial Supervisory Service said the incident is a liquidity crisis stemming from a mismatch between illiquid investment assets, an open-end fund structure, and leverage investments, coupled with recurring malfeasances in the absence of proper compliance. In response, the Financial Services Commission on April 27, 2020 unveiled its finalized plan to improve hedge fund regulation, which set out three key policy directions: stronger risk management via self-regulation and market discipline; improvement in fund liquidity management and stronger investor protection; and stronger oversight and inspection. It’s important to note that institutional investors in overseas markets have increased their calls for better fund governance and higher market discipline via independent service providers after massive losses and redemption delays during the global financial crisis. Minimized regulation under the premise of self-regulation by professional market participants is exactly what underlies the spirit of hedge funds. To help hedge funds to fully function and create maximum benefits, each market participant should work to accumulate reputation capital to improve independence and transparency.

The Lime Asset Management fiasco and plans for regulatory improvement

The Financial Supervisory Service in South Korea unveiled on February 14, 2020 its intermediary result on its probe into the redemption freeze by Lime Asset Management. According to the result, the Lime fiasco is a liquidity crisis triggered by two major structural issues combined: a maturity mismatch where its funds investing in illiquid assets such as mezzanine debt and privately placed corporate bonds chose to have an open-end, or a short-term closed-end structure; and its leverage structure using total return swaps (TRS). Also found problematic is the lack of compliance during the process of investment decision making. The absence of proper compliance in turn gave rise to several malfeasances including arbitrary decision making by a sole fund manager. With regard to this, the FSS and the Financial Services Commission joined hands together to unveil the final measures to improve Korea’s regulatory framework on hedge funds on April 27, 2020. The gist of the measures includes bolstered risk management via market discipline led by market participants; an improved fund management framework, e.g. liquidity management for investor protection; and tougher supervision and inspection.

A hedge fund failure as large as the Lime fiasco is unprecedented in Korea, but this occurs repeatedly in the US where hedge funds have long taken hold. The most prominent example could be Madoff’s Ponzi scheme in 2008. Although causes behind such a failure could vary, the most common causes are moral hazard of key fund managers in the absence of internal and external controls. By nature, the structure of a private fund—an investor (limited partner, LP) delegating investment to a fund manager (general partner, GP) via partnership—is prone to issues such as an agency problem and conflicts of interest between investors and fund managers as well as between investors. More specifically, a wide range of conflicts could arise regarding, e.g., estimating the net asset value (NAV); taking excessive risk for management fees; and conflicts of interest among investors when one manager operates more than one funds sharing the same investment strategy, etc.

In major overseas markets, the so-called hedge fund governance took hold widely as investors’ long calls for transparency and independence with regard to managing hedge funds after a series of incidents, e.g., large-scale losses and redemption delays during the global financial crisis, and the Madoff scheme mentioned above. Hedge fund governance can be defined as a self-regulatory system in the hedge fund ecosystem that consists of the responsibility of interconnected market participants including investors, asset managers, regulatory authorities, service providers, etc.1) From such a perspective, any improvement in hedge fund governance can be summed up in stronger market oversight via stronger independence and transparency of hedge funds.

Increased calls for improvement in hedge fund governance are closely related to institutionalization of hedge fund investors. Conventionally, high-net-worth individuals were primary investors in hedge funds. Since the late 1990s, however, hedge funds rose as one of primary alternative investments among institutional investors such as pension funds, which helped accelerate a rapid pace of institutionalization in hedge funds. As of the end of 2017, the composition of institutional investors in US hedge funds consists of foundations (21.0%), funds of funds (19.8%), public/private sector pension funds (18.7%), endowment plans (13.0%), and asset managers (2.7%), which combined make up 75.2%. On the flip side, wealth managers and family offices linked to high-net-worth individuals account for 20.6%.2)


Hedge funds vs. private equity from the governance perspective

Because an investment risk is inherent in any private fund, a hedge fund failure is fundamentally no different from any failure in other private funds. However, an operational risk and the resultant failure have come to the fore in many hedge funds inside and outside Korea whereas such a case is much less found in private equity (PE). This doesn’t mean that one fund outperforms the other in terms of economic functions. Rather, such a divergence stems from their different investment targets, more specifically, their different liquidity profiles. In general, liquidity of an investment asset is determined by the depth of the market in which the asset is traded. Buyouts, one of the most exemplary PE investment strategies, primarily target equity shares that are traded in a highly illiquid market. It’s safe to say that PE is equipped with mechanisms that could effectively reduce the agency costs involved in PE investing, e.g., the closed–end fund structure corresponding to illiquidity of investment assets, performance fees based on realized returns instead of mark-to-market valuation, pressure to successfully exit from investments before the fund liquidation.

In the US, hedge fund governance has improved in the direction of bolstering market discipline and self-regulation by enhanced transparency and independence of investment management. One of the phenomena arising with regard to greater independence of hedge funds is an increase in checks and balances via third-party service providers. Notably, prime brokers and fund administrators have expanded their roles in this market. Prime brokers are positioned to have detailed, up-to-date information on hedge fund transactions and counterparties, in connection with managing collateral acquired from the loan provided to hedge funds. During the process, it was slowly realized that they are in a position to keep a check on hedge funds’ excessive risk taking. In addition, third-party fund administrators come to play a greater role as hedge funds are turning to a third-party for outsourcing their back-office functions such as valuation, accounting, compliance, sales and redemption, client communication, etc. Third-party fund administrators also contribute to helping hedge funds to meet greater calls for higher transparency and more disclosure. With professional services such as monthly valuation and regular reporting to investors, they enhance investor confidence in hedge funds.

Although independent third-party service providers are a key entity carrying out checks and balances as well as market discipline based on their reputation capital, it is investors who should ultimately lead market discipline. The same also holds true for stronger hedge fund compliance, which is only possible as long as investors carry out their share of due diligence and monitoring on investment and operational risks. It’s important to note that the calls for better hedge fund governance via greater management transparency and independent oversight were made by no one but institutional investors such as pension funds who also take on fiduciary duty.

If one hedge fund failure leads to tougher regulation on the whole hedge fund industry, this might risk dampening the benefits of hedge funds and pushing up regulatory costs, eroding investment returns. Hence, it is not all that desirable for a hedge fund reform to head towards regulatory discipline. What’s more desirable is a hedge fund market where market participants—instead of regulatory discipline—carry out checks and balances for managing their own risks, form a reputation-driven market, creating a mutually beneficial, win-win relationship with each other.

Even the US hedge fund market, one of the most established and institutionalized markets, sees recurring hedge fund failures. Given that, it is only natural for Korea to see another incident of investment failure or malfeasance involving hedge funds in the future. Nonetheless, such an incident should be regarded as growth pains that are inevitable during the rapid growth of hedge funds in Korea. This should not lead to a contraction in the hedge fund market. The true spirit of hedge fund lies in minimal regulation based on market discipline and self-regulation, aiming for higher market efficiency and better provision of risk capital. If market participants such as prime brokers, custodians, accounting firms, and distributors fully equip themselves with greater independence and transparency via reputation capital, this will help the whole market to self-manage its own investment and operational risks, which in the end will maximize the benefits of hedge funds.
1) Scharfman, J., 2015, Hedge Fund Governance, Elsevier
2) Preqin Special Report: Hedge Funds in the US (July 2018)
3) Aragon, G.O., Ergun, T., Getmansky, M., Girardi, G., (2017), Hedge Funds: Portfolio, Investor, and Financing Liquidity, U.S. SEC White Paper
4) This report is based on 2013-2015 quarterly filings of Form PF, nonpublic information required by every SEC-registered private fund (PF) with at least $150 million. It is found that about 34% of hedge fund positions can be sold without market impacts within one day or less, while the average time to liquidate hedge fund positions is 71 days.