Find out more about our latest publications. 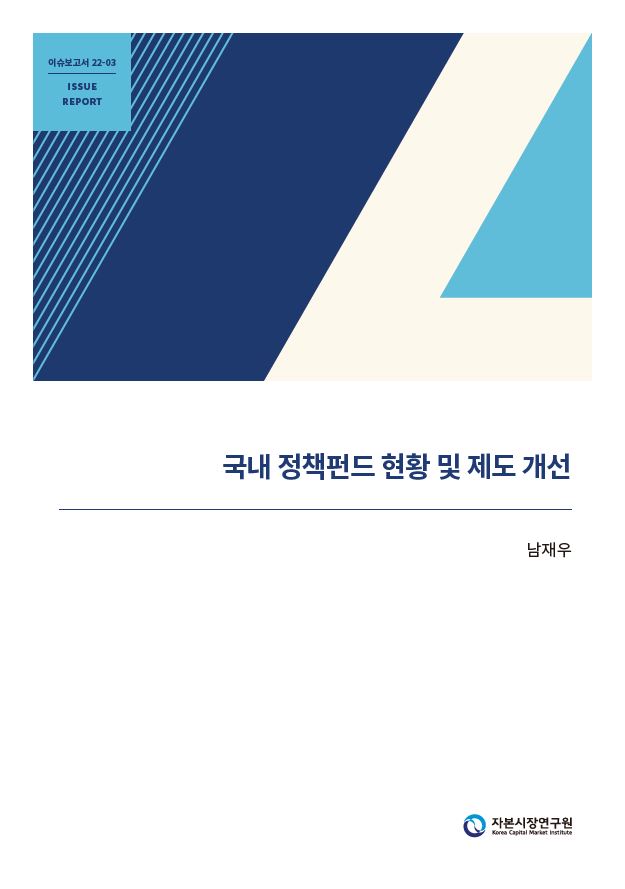 Government Sponsored Venture Capital Funds in Korea: Recent Trends and Policy Issues [22-03]
Research Fellow Nam, Chaewoo / Mar. 08, 2022
A government venture capital (GVC) fund refers to a fund of funds financed by the government. It aims to increase the supply of funding to sectors that are of public policy importance but are unlikely to receive sufficient funding from the market. Although each government department manages a number of GVC funds, there are growing concerns about inefficient public spending, primarily due to unreasonable target market setting and lack of a comprehensive administration system. As an essential precondition, the GVC scheme should minimize crowding out private venture capital funds while providing a pump primer to effectively nurture the relevant market. The government should adhere to this policy objective and place relevant constraints consistently during the entire GVC funds’ cycle including fund establishment-management-liquidation phases.

When a GVC fund is newly set up, factors including the possibility of crowding out private VC funds, the attainability of policy goals and inefficiency stemming from overlapped investments should be fully taken into account. It is desirable to take a conservative approach to the establishment of a new GVC fund after examining the appropriateness of government-sponsored equity investment and the availability of other supporting policies. What is important in GVC fund management is to find a proper balance between non-financial policy objectives and the marketability of private venture funds. This requires the public fund of funds, which acts as a general partner (GP) exclusively responsible for GVC funds, to have investment capability and expertise. Although target markets and investment purposes of GVC funds vary depending on policies that each government department seeks to implement, it would be cost-effective to hinder the establishment of a separate GP for each fund if possible. A GVC fund’s dissolution needs to be distinguished from the liquidation of its GP. Also necessary is the privatization of the public fund of funds.

The government-financed startups development policy has both benefits and drawbacks. However, it is also true that the GVC fund is one of the main drivers behind growth of Korea’s enterprises. It is high time that we should discuss how to improve Korea’s GVC scheme regarding the startups development policy that evolves from quantitative expansion to qualitative growth. 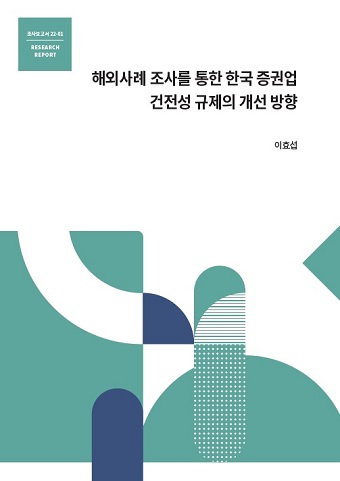 Securities Sector’s Financial Soundness in Korea Presented through Comparison with Foreign Regulatory Frameworks [22-01]
Senior Research Fellow Lee, Hyo Seob / Feb. 21, 2022
Although securities firms have played a pivotal role in the development of capital markets, in-depth research on financial soundness regulations that have the greatest impact on their business activities has rarely been undertaken. Since its first introduction to Korea in 1997, the previous Net Capital Ratio rule had been in place for about 20 years. In 2016, the financial authorities decided to adopt the new Net Capital Ratio approach (new NCR) with a view to enhancing global competitiveness and expanding risk investment capabilities. However, a systematic analysis of how the introduction of the new NCR has affected Korea’s securities sector has not been sufficiently conducted. In this regard, this report intends to take a look at financial soundness regulations on the securities industry in major economies like the US, Europe, and Japan, countries with a long history of the capital requirements regulation, and to examine changes that the adoption of the new NCR has brought about to Korea’s securities sector. In addition, it would analyze regulatory divergence between Korea and other advanced countries, aiming for presenting directions for regulatory improvement in the prudential framework to which Korea’s securities firms are subject.

As shown in the analysis of regulations on the securities sector’s financial health in major economies, the US NCR has evolved based on the philosophy of company liquidations-related liquidity requirements with a top priority of protecting customers’ assets in case of an insolvency event. The US introduced the NCR in 1934 when the Securities Exchange Act came into effect, and established the current capital requirement formula after undergoing several revisions such as the 1975 introduction of the Uniform Net Capital Role. The current NCR approach can be classified into three types: the basic method, the alternative method, and the alternative net capital method. European countries including the UK use a Basel-style approach that has emphasized the importance of preventing bankruptcies of securities firms under the regulatory philosophy of the going concern-based prudential framework. The previous Basel-based regulation on the securities sector is similar to the capital requirements to which commercial banks are subject. Europe is expected to significantly improve regulations on the securities industry’s financial soundness from the second half of 2021. This means that in practical terms, European countries would shift towards the US NCR approach.

Amid the worsening financial health of securities firms in the mid-1990s, Korea introduced the previous NCR rule in April 1997 by benchmarking Japan’s capital requirements framework. The previous NCR rule laid the foundation for the regulatory framework for the securities sector’s financial health, which helped securities firms overcome the 1997 Asian financial crisis and the 2008 global financial crisis. Since the new NCR was implemented in 2016, Korea’s securities industry has seen a sharp increase in equity capital amount, expanded into overseas markets, and considerably increased profitability in IB businesses. Given this performance, the new NCR appears to have achieved its policy objectives. On the other hand, some brokerage firms have seen a surge in the issuance of derivative-linked securities and the debt guarantee value over the same period, which increased prudential risks in some segments. Furthermore, small securities firms have suffered reduced investment capabilities and worsening profitability. This highlights that the impact that the new NCR approach had on the securities industry varied by size of firms.

Additionally, this report undertook a comparative analysis of capital adequacy requirements for the securities sector in both Korea and major economies. The analysis reveals that in terms of calculating the capital adequacy ratio, the net operating capital, and gross risks, Korea’s regulatory regime is more stringent than those of other countries. Korea is not much different from its counterparts when it comes to the calculation of capital adequacy ratios. However, its regulatory scheme can be considered more rigorous given that Korea is applying a single capital adequacy ratio to brokerage firms regardless of their size. What is also notable is that it is hard to find any government around the world that has adopted a leverage ratio regulation as part of the prompt corrective action system. Against this backdrop, the introduction of the leverage ratio regulation to the securities sector appears to be a somewhat stringent regulatory measure.
The following suggestions should be taken into consideration to improve Korea’s regulatory framework with respect to the securities industry’s financial soundness. First, the financial authorities need to provide more flexibility to the application of capital adequacy ratios depending on the size and function of securities firms. For instance, it may be desirable to apply the Basel-style capital requirements to IB securities giants and to allow small- and medium-sized brokerage firms to choose between the net capital ratio and the Basel-based approach. Second, the net operating capital and gross risks should be calculated in proportion to economic risks. Third, it is necessary to keep to a minimum the use of capital requirements for achieving policy objectives. Lastly, in the long run, the leverage ratio system should be employed only to curb systemic risks. In this regard, the potential systemic risk of the securities sector needs to be assessed on a regular basis, and if the risk assessment shows that the risk level remains low, the regulatory threshold of leverage ratios should be reduced.

Private Secondary Market Platforms for Non-reporting Corporations Equities in the US and their Implications [15-02]
Research Fellow Nam, Chaewoo and others / Feb. 16, 2015

A vibrant venture capital market requires well-functioning exit routes, especially IPO and M&A, the two main routes. There is a growing demand for an alternative exit channel because IPOs require more time and the M&A market in Korea is not mature yet. Private secondary market platforms in the venture capital cycle not only provide alternative exit routes, but they also have a positive spillover effect on the overall venture ecosystem. They alleviate the lack of information and information asymmetry and provide liquidity to angel investors, current and former startup employees, and entrepreneurs, and ultimately create a positive externality for the IPO market.

The secondary market in Korea is less regulated, compared to that in the US, from the perspective of securities distribution as there are no requirements on the holding period and information disclosure. However, OTC secondary market transactions in Korea are subdued due to a narrow interpretation of the definitions of and transactions in the exchange in the Financial Investment Services and Capital Markets Act (FSCMA).

SecondMarket and SharesPost are two representative private secondary market platforms in the US. As registered broker-dealers, they have IT systems for private securities transactions within the US securities regulations.

SecondMarket and SharesPost have effective customized liquidity programs that alleviate information asymmetry through encryption technology and non-disclosure agreements with program participants, which provides an important example for addressing information asymmetry, a major hindrance in the Korean OTC secondary market. In addition, the primary capital raising programs of SecondMarket and SharePost are important developments since a private company can raise capital without an IPO while remaining private. Such programs are supported by the JOBS Act's deregulation of private companies in the number of registered shareholders and allowance of general solicitation.

The main hurdles for the OTC secondary market for private companies’ stocks in Korea are summarized as: (1) restrictions on OTC transaction methods, (2) restrictions on public offering, (3) prohibition of illegal market opening, and (4) prohibition of internalization. Presently, K-OTC is the only legal organized OTC market, and deregulation is essential for diverse and vibrant private secondary market platforms such as those in the US.

This report suggests the following regulatory changes. First, regulations of OTC secondary markets need to be separated into those for non-listed public companies and those for non-listed private companies. Second, private secondary market platforms should be diversified and allow securities companies to run the platforms. Third, internalization should be permitted so that securities companies can provide the intermediary function. Fourth, measures for investor protection should be strengthened, including ex ante measures such as risk notices and disclosure requirement, and ex post measures to prevent current illegal transactions in the OTC market. Finally, the mechanical 50 person criteria for dividing public offering and private placement, as well as the requirement to be individual professional investors, need be relaxed so that individual investors can be more easily classified as professional investors.