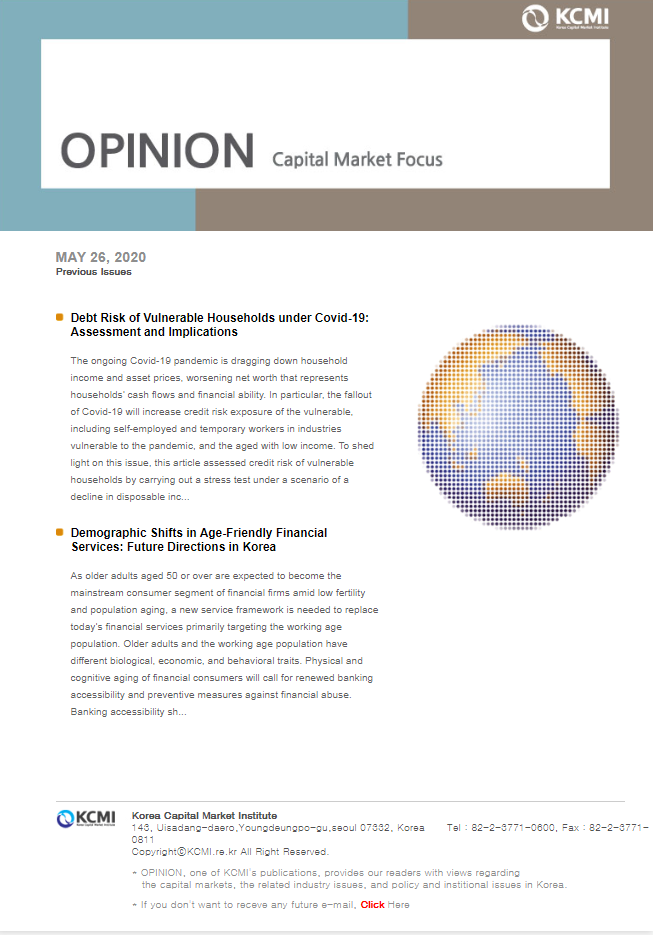 Summary
The ongoing Covid-19 pandemic is dragging down household income and asset prices, worsening net worth that represents households’ cash flows and financial ability. In particular, the fallout of Covid-19 will increase credit risk exposure of the vulnerable, including self-employed and temporary workers in industries vulnerable to the pandemic, and the aged with low income. To shed light on this issue, this article assessed credit risk of vulnerable households by carrying out a stress test under a scenario of a decline in disposable income, financial assets, and real assets. According to the result of the test on three household groups (the self- or temporarily-employed group; the low income group; and the over-60 group), a hypothetical economic impact will increase the number of marginalized and high-risk households more in the self- and temporarily-employed group than in the other two groups. Also found is a higher increase in debt at risk in the over-60 group than other groups. Particularly noteworthy is the higher amount of per-household debt exposed to credit risk in the self- and temporarily-employed group and the over-60 group than that in the low income group. What this implies is the necessity for additional financial support if the fallout of Covid-19 lingers for a long time. More concretely, it is needed to replenish the income of the vulnerable?aged and temporary workers with low income and unstable employment status, and the self-employed suffering from a serious fall in their income. A more fundamental approach would be effort to rein in excessive household debt while boosting household income by helping the vulnerable to find a job or start a business.

The spread of Covid-19 is projected to be the central cause to Korea’s economic slowdown this year because the virus disrupts the global supply chain and brings down demand for consumption, investment, and global trades. Especially, the contraction in global demand is dragging down the number of incoming tourists (service exports) as well as goods exports, while the declining domestic consumption worsens trades and domestic demand. Furthermore, the disruption in the global supply chain deters production of Korea’s manufacturing sector, which seems to adversely impact Korea’s real economic activities.1) According to a report by the Institute of International Finance (IIF), household debt to GDP rose in 52 countries in the post-crisis era. The report forecast that unemployment and lower household income amid Covid-19 will further push up the ratio of global household debt to GDP. Korea’s private sector credit growth is second-highest after Sweden among those 52 nations, showing a possibility of even greater debt repayment burden of households. Compared to previous epidemics such as SARS, H1N1, and MERS, the Covid-19 pandemic poses particularly higher uncertainties for Korea’s economy. As the resultant decrease in household income and the abrupt change in asset prices could dampen households’ debt repayment ability, the pandemic is pointed to as a potential risk factor worsening systemic risk in the financial markets. Against the backdrop, this article looks to the Survey of Household Finances and Living Conditions to find out overall debt levels and borrowing constraints of Korean households. Also analyzed are vulnerable households that are likely to be exposed to credit risk amid falling income and asset prices (financial and real assets) at the height of the Covid-19 pandemic, with data breakdowns by employment status, income quintiles, and age of household heads. 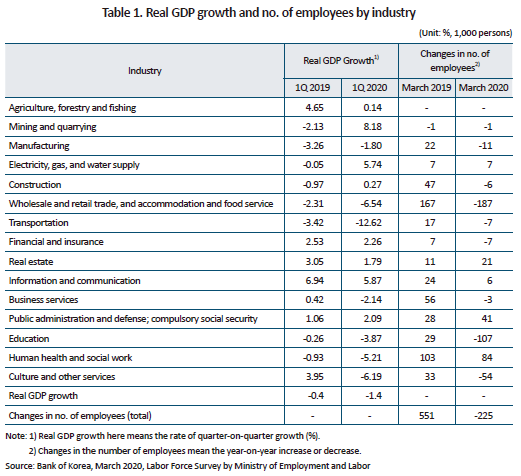 According to the Bank of Korea, Korea’s household credits stood at KRW 1,600 trillion at the end of the fourth quarter of 2019, of which household loans were KRW 1,504 trillion and merchandise credits were KRW 95 trillion. The amount of household debt in Korea has risen continuously, coupled with a steady increase in the ratio of household debt and assets to nominal GDP. This has exacerbated the vulnerability of the income-expenditure as well as asset-liability structure in Korean households.2) As the Covid-19 pandemic is worsening macroeconomic conditions at home and abroad, the impact could spread to households’ disposable income, asset prices, and borrowing costs, which will adversely affect individual households’ cash flows and net assets. This could further exacerbate debt payment ability of households, and thus increase the number of marginalized households that are exposed to credit risk because their principal and interest payments and liabilities dwarf income and assets. Not only could this raise concerns about the social safety net, it could also make the assets of loan providers go sour. This will rattle financial stability.

In terms of asset prices, mortgage loans are particularly risky because they account for a large part of household debt. In particular, households holding a higher share of real estate assets compared to their income and net assets are highly likely to be exposed to credit risk if home prices go down. The Bank of Korea’s housing price outlook went down by 16 points from the previous month to 96 in April 2020. This came amid Covid-19’s adverse impact on the economy as well as housing prices, on top of the government’s policy stance to stabilize the real estate market. A drastic fall in housing prices could make households with maturing debt have to repay all or part of debt to their creditors, which could lead to a liquidity shortage. If they cannot repay their debt, they will go bankrupt. Accordingly, their houses, the collateral for their debt, will have to be disposed by credit financial institutions, which could further push down housing prices and worsen households’ debt payment ability.

Net worth, representing a household’s cash flows and debt repayment ability, could be useful for assessing the risk of household debt and identifying high-risk and marginalized households out of overall households with debt (“indebted households”, hereinafter). Marginalized here refers to a household whose debt to service ratio (DSR) is over 40%, and that cannot repay the debt without disposing of real assets due to its financial liabilities dwarfing financial assets. A high-risk household here is defined as a marginalized household meeting both the following conditions: Its total liabilities are larger than total assets; and its principal and interest payment is larger than its disposable income excluding consumption expenditure. In general, the BOK and the IMF use the DSR to classify households potentially at risk because a higher ratio of the principal and interest payment to disposable income could worsen a household’s financial condition in terms of cash flows. However, this fails to reflect the ratio of consumption expenditure to disposable income. This is why this article tries to identify high-risk households by looking at whether a household’s disposable income excluding consumption expenditure is sufficient to afford the principal and interest payment. 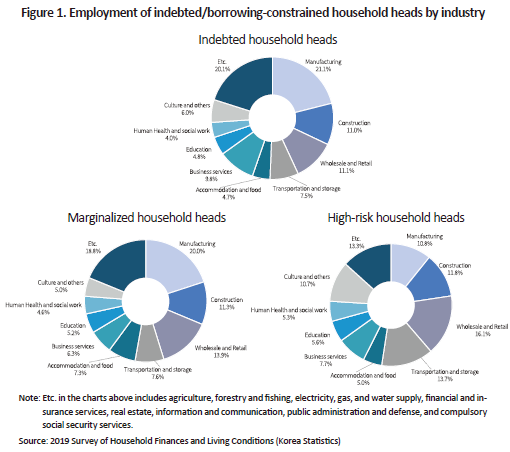 In assessing vulnerable households’ exposure to debt risks amid the fall in disposable income as well as asset prices, this article carries out a stress test on vulnerable households classified into three groups: The self- and temporarily-employed group whose heads are self-employed or temporary workers; the low income group whose heads are in the first and second income quintiles; or the over-60 group whose heads are aged 60 or older.3) Debt repayment risk of a household is determined by its financial conditions in view of cash flows and its repayment ability in terms of the debt to asset ratio. Hence, a stress testing scenario should mainly include changes in variables that could adversely affect households’ financial conditions and payment ability. Taking into account macroeconomic risk factors in the fallout of Covid-19, this article focused primarily on three factors: worsening financial conditions in cash flows due to falling household disposable income; a decline in the prices of financial assets such as stocks and bonds; and a fall in the prices of real assets including properties. More concretely, it tries to assess the number and debt size of marginalized and high-risk households under the stress scenario assuming a 30% fall in household disposable income that is concurrent with a 21% decrease in financial asset prices; and a 10% fall in real asset prices.4) 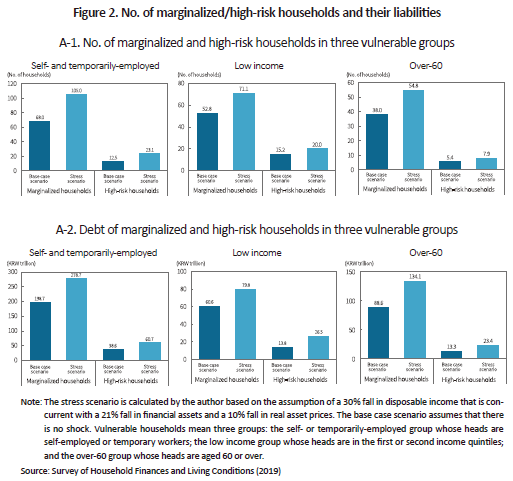 Covid-19 and its economic fallouts could make a sizable number of households suffer from falling household income or job loss and be exposed to credit risk. In that case, marginalized households and high-risk households faced with a high debt repayment burden will grow into a potential risk factor in financial stability. It’s somewhat relieving that the absolute size of debt held by marginalized and high-risk households could be insignificant. However, the number of those households is formidable enough to raise an alert on any potential distress of vulnerable households from the perspective of the social safety net.

In its bid to protect the self-employed and small merchants against the economic fallout of Covid-19, Korea’s government has rolled out a series of policy actions, e.g., financial support such as loans and guarantees, and rehabilitation plans for debtholders. The overall financial industry extended debt maturities and deferred interest payments for small merchants facing a temporary liquidity shortage. The financial support plans are trying to help vulnerable debt holders at risk due to unpaid leave and job loss with various actions, e.g., to prevent debt overdue by deferring principal payment and debt collection as well as cutting loan principal; to help them with rehabilitation plans; and to prevent excessive debt collection. Particularly desirable is a differentiated policy action by classifying debt holders into single-debt, multi-debt, and long-term delinquency groups. Also necessary is to mitigate the risk of household debt, which requires fiscal support on top of financial policy support for minimizing debt increases in vulnerable households, and boosting, albeit temporarily, their income.

Recently, Korea’s government began distributing emergency disaster relief funds to all citizens. If Covid-19’s economic fallouts linger for a long period of time, additional financial support is needed to replenish income for aged, temporarily-employed or self-employed household heads who have a vulnerable employment status and declining income. A more fundamental approach would be to help marginalized household heads to find a job or start a business for stable income streams, while on the other side closely monitoring and managing excessive household debt levels. One area particularly worth noting is mortgage loans. It’s worth considering deferring the payoff of maturing mortgages for a homeowner whose housing price falls steeply. Currently, mortgage loans are not included in the list of payment deferral allowed for Covid-19 victims. Although the principal payment can be delayed up to one year, the interest payment is not. This means that any abrupt fall in housing prices will enfeeble repayment ability of any household with its mortgage nearing maturity.
1) Bank of Korea, March 2020, Monetary Policy Report.
2) Household credits and flows of funds data by the Bank of Korea.
3) This article models after Kim and Yoo (2013) to come up with stress test scenarios. The recovery rate of assets at a time of a crisis is assumed to be 70%. Also considered is the heterogeneity in consumption patterns across households in different income quintiles, which were estimated by using the consumption function (Kim & Yoo, 2013, Assessing Korean households’ credit risk: Stress tests with household level data, Economic Analysis, 149(2): 59-95).
4) The size of the fall in disposable income assumes an extreme shock to vulnerable households. Financial assets are estimated by using the fall in the KOSPI between February 2020 and March 2020. For real assets, this article uses the fall in asset prices under an extreme shock in Kim and Yoo (2013).