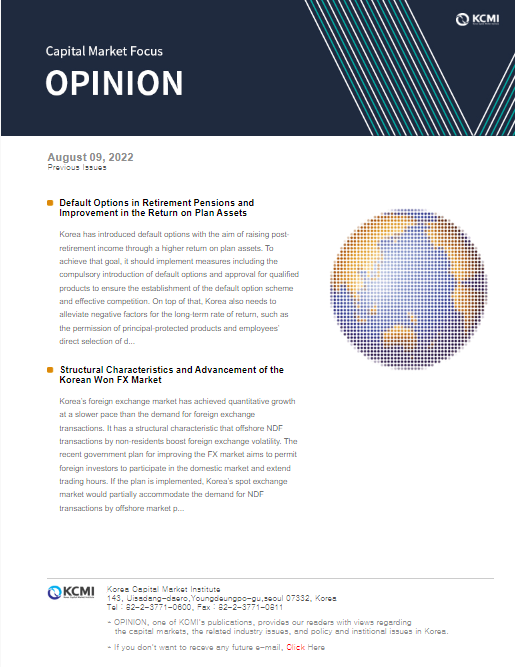 Summary
Korea’s foreign exchange market has achieved quantitative growth at a slower pace than the demand for foreign exchange transactions. It has a structural characteristic that offshore NDF transactions by non-residents boost foreign exchange volatility. The recent government plan for improving the FX market aims to permit foreign investors to participate in the domestic market and extend trading hours. If the plan is implemented, Korea’s spot exchange market would partially accommodate the demand for NDF transactions by offshore market participants, thereby facilitating liquidity provision and alleviating exchange rate volatility. It is also expected to enhance foreign investors’ confidence in the Korean won FX market. In the medium and long term, Korea should exert continuous efforts for the advancement of the FX market to ensure that the Korean won is freely traded in major global financial hubs.

The Korean government has selected the “advancement of the foreign exchange market” as one of the major tasks for this year’s economic policy. It seeks to reform the regulation regarding foreign transactions with an amendment to the Foreign Exchange Transactions Act while bolstering the FX market infrastructure to support the reform, aiming for adopting an innovative financial system for Korea’s external sector. As a strong US dollar has recently pushed upward the Korean won exchange rate to surpass KRW 1,300, how to maintain extremal soundness comes to the fore. Under the circumstances, the policy line for achieving an advanced FX market is of great significance.

Against this backdrop, this article takes a look at the current state and characteristics of Korea’s onshore and offshore FX markets, and explores key aspects, expected effects and future challenges of the government strategy for improving the FX market.

Korea has seen foreign transactions resulting from current and capital transactions soaring dramatically in volume for the past 20 years, driven by its improved open economy system, which has considerably boosted demand for FX transactions. Compared with the early 2000s, trade deals such as import and export transactions have almost quadrupled in size while demand for FX trades in capital and financial transactions has increased at a more rapid pace than in current transactions due to the rise in global capital flows. This has driven up foreign investments in Korea immensely, leading to a six-fold increase in the outstanding balance of external financial debt. In addition, as Korea continues to run a large current account surplus, overseas financial savings by domestic residents have surged rapidly, resulting in a 21-fold growth in external financial assets.

According to the data released by the Bank for International Settlements (BIS), Korea’s foreign exchange turnover represented 2.0 percent of the total turnover in the global FX market (as of 2019), taking 12th place. However, the current growth trend is considered relatively slower, given the growth pace of Korea’s foreign transaction volume and a two-fold increase in global FX transactions in the wake of the global financial crisis.1) Under this context, Korea’s FX market has been criticized for not meeting the soaring demand for FX transactions.

The slower quantitative growth can be partially attributed to qualitative aspects such as the substructure of the FX market. Notably, only the financial institutions approved by the foreign exchange authorities including domestic foreign exchange banks and some large securities firms could participate in the interbank market that serves as a pillar of the FX market. The interbank market has no market maker such as major banks that provide liquidity through two-way quotes during a crisis of FX liquidity. In the market, the Korean won is mostly exchanged with the US dollar while cross-currency transactions involving the euro or yen have been rarely conducted.2) Spot exchange transactions primarily mediated by foreign exchange brokers are subject to time constraints because such transactions should be done during business hours of the stock exchange from 9:00 a.m. to 3:30 p.m.

Above all, it is noteworthy that won-dollar spot exchange transactions are only conducted within the Seoul FX market. Unlike the won currency, many other international currencies3) are trading ceaselessly around the clock with a time lag in global financial hubs such as New York, Tokyo and London. This causes difficulties in FX hedging by global investors, which the MSCI has cited as an impediment to Korea’s promotion in the MSCI developed market index.


Expansion of the offshore won-dollar NDF market and its impact

As such, spot exchange rates of the won are determined primarily by offshore non-residents thanks to the offshore NDF market expansion, which not only undermines Korea’s dominance over its exchange rate but also contributes to heightening exchange rate volatility. Especially amid intensifying uncertainties around the globe, the growth of FX transactions by non-residents has become the main channel of raising offshore exchange rates and exchange rate volatility. More recently, the won exchange rate continues to rise after the US dollar has gained value due to the Fed’s steep rate hikes in 2022, as it did during the 2008 global financial crisis. Under this situation, it is worth considering a surge in the volume of NDF transactions as illustrated in Table. In Korea, participants in the offshore NDF market tend to be regarded as foreign exchange speculators, which is partially attributable to such structural factors inherent in the onshore and offshore FX markets.


The plan for the FX market improvement: Expected effects and challenges ahead

First, it would be possible for Korea’s spot exchange market to accommodate part of the demand from participants in the offshore NDF market. When it comes to transactions for FX hedging, foreign investors are likely to turn to the onshore spot exchange market from the offshore NDF market if the onshore market has relatively abundant liquidity and offers advantages in transaction costs. In this case, spot exchange transactions that are creeping up in Korea’s FX market would surge in volume, leading to more liquidity and quantitative expansion in the onshore market. In addition, Korea could tighten its grip on its exchange rate as Korea’s FX market plays a leading role in determining the exchange rate.

Third, allowing non-residents to engage in FX hedging would increase their access to the FX market for the won and enhance trading convenience, thereby raising their confidence in Korea’s FX and financial markets. Furthermore, it is expected to help Korea secure a developed market status from the MSCI since the absence of the FX market that is open 24 hours has been pointed out by the MSCI as an obstacle to its inclusion in the developed market index.

As mentioned above, the government plan for the advancement of the FX market would have expected effects on the market. In the medium and long term, however, it is desirable to establish the offshore spot exchange market for the won at an appropriate time. If the Korean won-based spot exchange trades are carried out freely in the offshore market, the won could be acknowledged as an international currency, overcoming limitations as a regional currency traded in the Seoul FX market. In addition, this would contribute to enhancing trading convenience for foreign investors and their confidence in the won. Moreover, residents would engage freely in FX hedging for their ballooning overseas investments and benefit from lower transaction costs.

In terms of the scale of the real economy, external opening and financial market development, Korea has satisfied most of the basic requirements for establishing the Korean won as an international currency. To achieve an advanced FX market, it should strive to ensure that the won is traded freely in major global financial hubs, which would improve the won’s standing in the global market. To this end, a market maker should be secured to promote transactions in the early stage of the offshore market formation. It is also necessary to reform the legal framework regarding restrictions on acquisition of the won currency by non-residents and the currency transfer between the Korean won accounts and to improve the settlement system for the currency transfer to be conducted after spot exchange trades. Accordingly, Korea should move forward with the plan for the advancement of the FX market in concert with the amendment to the Foreign Exchange Transactions Act while closely monitoring any unexpected side effects.
1) According to the BIS survey, the daily average FX turnover of the global FX market jumped to $6,188 billion in 2019 from $3,810 billion in 2007.
2) The won-yuan interbank market has been cross-listed both in Seoul and Shanghai since 2015, but the won-yuan trading volume represents only one-tenth of the won-dollar transactions.
3) An international currency means a currency that has an interbank FX market being operated in major global financial hubs. According to the Seoul Money Brokerage data, there are a total of 27 currencies being traded including not only currencies of major advanced countries but also emerging economies’ currencies such as the Thai baht, the Kazakhstani tenge, the Russian ruble, the Czech koruna, the Turkish lira and the Mexican peso.
4)  A NDF, a type of forward contract, is primarily traded for local currencies in offshore markets for the purpose of foreign exchange hedging and speculative transactions. The difference between NDF rates and spot exchange rates is settled in the US dollar.
5) In terms of trading volume in the offshore NDF market, the most traded currency is the Korean won, followed by the Indian rupee with a daily average of $50.02 billion, the Brazilian real with $35.75 billion, the New Taiwan dollar with $30.86 billion and the Chinese yuan with $11.77 billion.
6) The closing time of the London FX market is taken into account for the time extension.