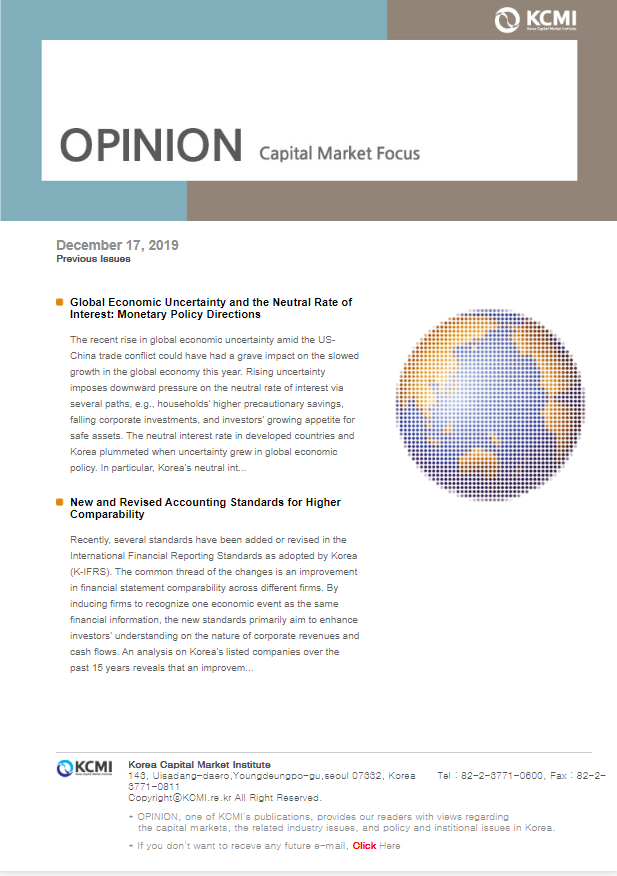 With the prolonging trade conflict between the US and China, the two largest nations taking up 42% of the global economy, uncertainty keeps lingering in the global economy. Although the two countries’ recent consensus on a phased approach to end the dispute is raising rosy expectations, policy uncertainty between the US and China dramatically pushed up the Global Economic Policy Uncertainty Index as well as the World Trade Uncertainty Index. Reflecting this trend on top of the slowed growth potential amid sluggish consumption and investments, there’s an increasing amount of uncertainty surrounding the monetary authority’s policy interest rate. According to a BIS report, the amount of government bonds trading at negative yields amounted to $17 trillion, about 20% of the global GDP as of end-August 2019. Such a low interest rate trend and strong appetite for safe assets appear to have stemmed from concerns among economic entities about the rising uncertainty in the global economy. Hence, rising global economic uncertainty is expected to structurally impose a negative impact on potential growth as well as to bring down the natural rate of interest (also called the neutral rate).1) The neutral rate plays a crucial role for monetary policymakers to determine whether the current policy interest rate either boosts or deters economic activity. It also offers an important tool based on which financial market participants estimate the future monetary policy path. As uncertainty has risen in the global economy amid the US-China trade war, the Korea-Japan trade dispute, Brexit, and the Hong Kong debacle, debates over the neutral rate and future monetary policy are becoming more important than ever. Against the backdrop, this article aims to explore the impact of growing global economic uncertainty on the neutral rate of interest, and then to discuss the implications for monetary policy.


Determinants of the neutral rate, and uncertainty

Since the global financial crisis reshaped the structure of the global economy, there have been growing discussions over reassessing the neutral rate level and the determinants. According to the existing literature, the neutral rate is determined by potential growth and many other factors that shape the structural characteristics of the economy. Particularly important in determining the neutral rate among those are labor productivity, the shift in demographic structure, households’ time preference, risk aversion, and economic uncertainty.2) Although each factor has an impact at varying degrees, lower labor productivity and shrinking working-age population due to the demographic shift (population ageing and low birth rates) are found to have a significant impact on a fall in the neutral rate (Baek & Kang, 2018). Economic uncertainty affects the neutral rate mainly via two paths. Figure 1 illustrates the path via which the neutral rate declines due to rising uncertainty.

First, in the face of uncertainty, a risk-averse economic entity tends to increase precautionary savings and take a wait-and-see attitude instead of carrying out aggressive investment (Bloom et al., 2009; De Paoli, & Zabczyk, 2013). The recent global economic uncertainty triggered by trade conflicts predisposed households to increase precautionary savings and cut consumption. Furthermore, a firm has an incentive to delay its decision making to gain more information by adopting a wait-and-see attitude in the face of uncertainty, and thus further postpone its investment plan. This causes an aggregate demand shortfall as well as a saving-investment imbalance in the macroeconomy, which accelerates a long-term recession and triggers a fall in the neutral rate. Former Treasury Secretary Larry Summers points to secular stagnation as a main cause behind the falling neutral rate (Summers, 2016). That is to say that a structural cause and the resultant slump in investment and household consumption could bring down the neutral rate. Summers also mentions that one of the structural causes behind the long-term recession is the increase in excessive savings amid rising uncertainty (a chronic fall in consumption).3) According to his lights, global economic uncertainty triggered by trade conflicts could induce excessive savings that dwarf investment demand, which could have an impact in the direction of bringing down the neutral rate.

Figure 2-A shows the GDP-weighted average on neutral rates and potential growth in developed countries (the US, Canada, the Eurozone, and the UK). Each nation’s neutral rate is provided by the New York Federal Reserve, estimated by the method of Holston et al. (2017)4) using real GDP, the consumer price index, and the real interest rate. And the shaded area shows uncertainty in global economic policy, one of the causes behind global economic uncertainty. In its World Economic Outlook report in Oct. 2019, the IMF cited rising uncertainty over economic policy as a primary cause of the global economic slump. Moreover, the AFP (Association for Financial Professionals) Risk Survey reported ‘political uncertainty’ and ‘regulatory uncertainty’ as the most influential risk factor affecting corporate earnings for the upcoming three years. Uncertainty ranked the highest at 43% in 2016, and 34% in 2019 among many risk factors surveyed. This suggests that uncertainty in economic policy amid the US-China trade war could be a factor that increases global economic uncertainty. 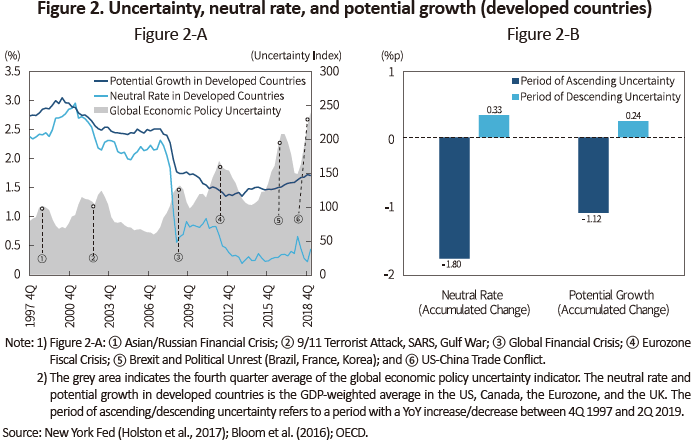 In Figure 3-B, Korea’s neutral rate went up 1.1 pp during the descending period between 2Q 2002 and 3Q 2019, while went down 5.2 pp during the ascending period. What’s notable is that the pace of Korea’s neutral rate decline is faster that in developed countries. Also worth mentioning is Korea’s pace of the neutral rate fall is faster than that of the growth potential fall, as shown in developed countries. During the period of rising uncertainty, the decline in the neutral rate (5.2 pp) was significantly larger than that of potential growth (3.81 pp), a phenomenon specific to Korea whose economy is largely affected by external factors. 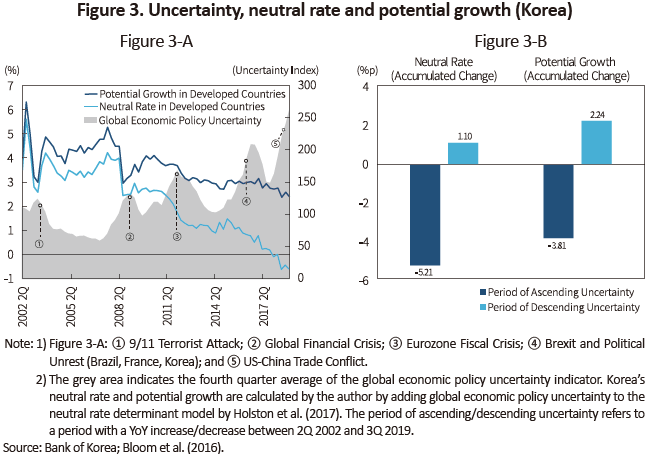 However, Korea’s neutral rate began falling again when economic policy uncertainty went up amid the Korea-Japan trade dispute and the US-China trade conflict. On top of that, the recent slump in inflation and the real economy brought down the neutral rate further, and shifted Korea’s monetary policy stance towards tightening between 1H 2018 and 3Q 2019. The Bank of Korea’s policy rate cut to 1.25% on October 16, 2019 could be read as a countermeasure against the widening real interest rate gap. Going forward, the future of the US-China trade conflict and Brexit are expected to affect global economic policy uncertainty and possibly keep functioning as a downside risk for the neutral rate level. This requires policymakers to pay focused attention to any rise in global economic uncertainty in their decision making related to monetary policy. 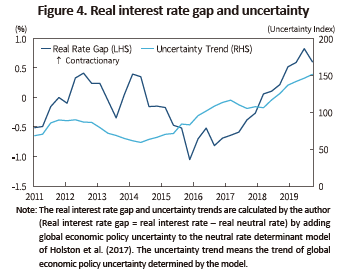 1) The neural rate refers to a theoretical short-term real interest rate with the economy at full employment and price stability (in other words, the economy at potential growth without any inflationary or deflationary pressure) while maintaining a long-term equilibrium with a balanced money supply (saving) and demand (investment) (Laubach and Williams, 2003). Hence, an increase in savings or investments leads to a decrease in the neutral rate. The neutral rate is unobservable and only estimated by an economic model.
2) Some regard financial headwinds/tailwinds as another key determinant to the neutral rate. A case in point is the view that the neutral rate has been primarily affected by the fall in investment demand amid the post-crisis debt overhang in households and firms (Lo & Rogoff, 2015).
3) Former Fed Chairman Ben Bernanke argues that one of the factors behind the neutral rate fall could be global savings gluts that have resulted from foreign reserves accumulated by export-driven emerging economics such as China and the liberalization of global capital flows. The global savings gluts here could be the cause behind Summers’s excessive increasing savings. However, because a change in global capital flows could reverse the recent fall in the neutral rate, this could be different from long-term factors affecting the secular stagnation.
4) It is known that the long-term downward trend in the neutral rate in developed countries is a common result obtained from other estimations as well (Holston et al., 2017).
5) The 1988 Russian financial crisis pushed up uncertainty, which made the neutral rate in the Eurozone area fall. During the political chaos sparked by the 2016 Brexit, the neutral rates in the UK and US fell in the short run. However, those had a limited impact on the weighted average of the neutral rate in developed countries.
6) I checked the structural shift in global economic policy uncertainty according to Bai and Perron (2003). The result indicates that uncertainty began to rise from 2Q 2011.
7) It's still hard to rule out other possibilities behind the neutral rate fall, e.g., the supply of China's cost-competitive electronic goods in Korea, the low interest rate environment due to intensified competition among firms, low inflationary pressure, contracting capital expenditures, rising household debt, etc. Another possibility is that the fall in potential growth in developed economies could have affected Korea's neutral rate fall (Kim & Park, 2013).
8) When the real interest rate is higher/lower than the neutral rate, monetary policy is contractionary/expansionary (with a positive/negative real rate gap).

(Korean)
Kim, M.S., Park, Y.S., 2013, Estimating the neutral real interest rate (NRIR) and analyzing factors of its fluctuation in Korea, Economic Analysis 19(4), 47-86.
Baek, I.S., Kang, H., 2018, Analysis on the recent rate hike in Korea and the US and the possibility of a shift towards low interest rates, Korea Capital Market Institute Issue Paper 2018-04.